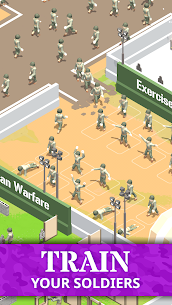 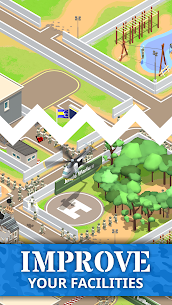 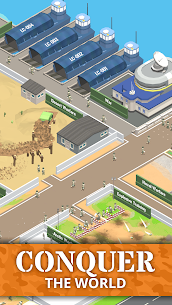 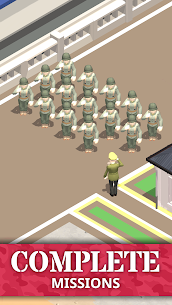 Idle Army Base Mod Apk Managing the army, expanding the area, training recruits, upgrading motor weapons, … a lot of things to do in a busy army base. Want to experience those? So join the game “ Idle Army Base Apk ” and start building your own military base. The exciting thing about this game is that it belongs to the Idle genre, which means it will automatically manage for you while you’re away. Because of the Idle mechanism, the only thing players need to do in this is an upgrade, unlock, and expand everything. 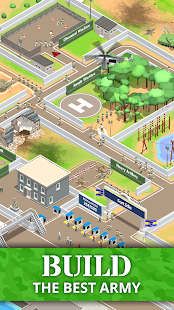 As a labor force and the most important thing in each base, the more recruits, the stronger the base. Not only that, according to the time of training, any rookie with a good attitude and achievement will immediately be promoted and advanced into the higher-level training processes.
In this game, the rookie will automatically enlist through the Bus Stop, the start of the game is very slow, but after a short time, it will become busy and busy.

As a place to receive recruits is also an essential place of the military base. Each period of time will give players recruits amount to enlist. If the player wants to increase the enlistment speed and the number of rookies, they must upgrade the bus station. With a little start-up funding, players will have to update the things needed for Bus Stop, such as Bus Frequency (time for recruits to enlist), Bus Seat (Number of recruits each time the bus arrives). Upgrades have no limits, and as long as players have money, they can upgrade as many times as they want.

After the rookie shows up, they have to wait a while at the gate to receive uniforms and personal effects. In other words, the rookie must pass through this place to enter the base. The time to complete the process of providing uniforms and equipment starts at 12s. Idle Army Base Apk The supply time can be reduced through upgrades. Starting with only one port, but later, the player can open up to 8 ports to be able to circulate rookies at a higher speed.

This is one of the most important places where the base is able to generate income. The way it works is very simple; the rookie comes here to practice and has to pay to go in. The limit at which new recruits can take part in the training will constantly be increased after each upgrade. In other words, if the player focuses on upgrading the training ground, the income rate will be higher.

The above is one of the essential things that players receive after starting their military zone management work. Later, players will be unlocked a number of new areas to train and train recruits. An army is not limited to just one field, and it means that there will be many different parts that players must unlock to enhance the overall strength of the army. They will also include facilities for storing and storing motor weapons, so building and expanding the base is a must.

Not only will you be exposed to many things in the army, but players will also understand how a true army works. If the player is later involved in any military-related activities in real life, this game will be an excellent example to apply. 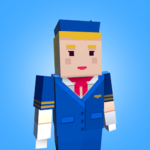 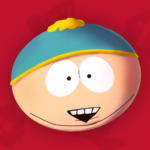